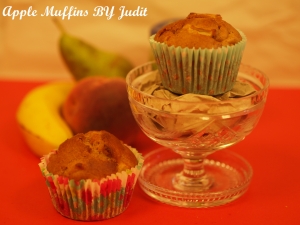 Cinnamon as a spice is obtained from the inner bark of several trees from the Cinnamomum family, and is commonly used in both sweet and savoury dishes all over the world. Some say, for the best taste one needs to use “true cinnamon” from the tree Cinnamomum verum, however, most cinnamon in different countries is derived from related spieces. Cinnamon is the name for perhaps a dozen species of trees and the commercial spice products that some of them produce. The Hebrew Bible makes specific mention of the spice many times: first when Moses is commanded to use sweet cinnamon in the holy anointing oil; in Proverbs where the lover’s bed is perfumed with myrrh, aloes, and cinnamon, and in Song of Solomon, describing the beauty of his beloved, cinnamon scents her garments like the smell of Lebanon.

Method
Preheat the oven to 200 C degrees or Gas 6 and line a 12-hole muffin tray with paper cases. Measure out flour, sugars, baking powder, spices and salt in a large mixing bowl. Add milk, cream, honey, oil, egg, apple sauce and vanilla. Stir until just combined, do not over-mix. Gently fold in chopped apples and spoon mixture in muffin cups. Add a sprinkle of icing sugar on top of each. Bake for 20 minutes or until golden brown on top.