“Everything in moderation… including moderation.” Julia Child

Historian speculations make one believe the Olmec tribe had discovered that the cocoa fruit was edible by observing various animals eating it . Almost certainly they were the first humans to consume chocolate, originally in the form of a drink, then realizing its many flavours and as many uses.  . They ate the fruit, crushed the cocoa beans, mixed them with water, spices, chilies and herbs, and finally began cultivating cocoa  in Mexico. Over time other tribes, the Mayans, the Aztecs too developed successful methods for cultivating cocoa. The cocoa bean was also used as a monetary measuring unit in trading.

In 1502, Columbus found cocoa beans on a native canoe during a stop-over in Nicaragua, but he did not appreciate its potential value. The true importance of this “brown gold” was not recognized until Hernando Cortez drank it with the Aztec emperor Montezuma, and took it back to the Spanish court in 1528 along with the equipment necessary for brewing the drink. Following a victory over the native tribes, Cortez intensified cultivation efforts in New Spain, with the intention of developing a lucrative trade with Europe. The Spanish court soon fell under the spell of this exotic elixir and adapted it to their taste, adding cane sugar, vanilla, cinnamon and pepper. Initially Spain reserved cocoa for its exclusive use, carefully guarding its existence from the rest of the world. Later, in 1585, the first cargo of cocoa beans arrived on the Iberian Peninsula from New Spain, launching the trade in cocoa, and resulting in the establishment of the first chocolate shops, causing a never ending demand, that lasts even today…

“…nothing is too much trouble if it turns out the way it should.” Julia Child 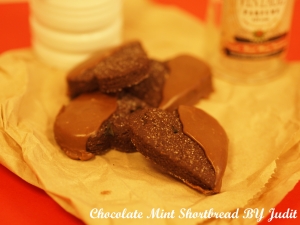 “Always start out with a larger pot than what you think you need.”  Julia Child 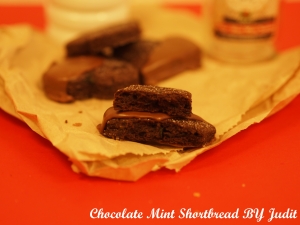 Method
In a bowl, sift or whisk together the flour, cocoa powder, and salt. In the bowl beat the butter and sugar until smooth then mix in the vanilla and mint extract.  Finally add chopped fresh mint. Add the flour mixture to the butter and sugar mixture and beat just until a dough forms. Chill in the fridge for 30 minutes. Preheat oven to 160 degrees C with the rack in the center of the oven. Line two baking sheets with parchment paper. Roll out the dough on a floured surface and using a cutter of choice pierce thick cookies. Place the cookies on the prepared baking sheets, spacing about 5 cm apart and sprinkle with caster sugar. Bake for about 15 – 20 minutes, or until the cookies are dry and firm to the touch. Remove from oven and cool completely on a wire rack. If desired (for taste and appearance) dip shortbread cookies in melted chocolate.