“A thing of beauty is a joy forever: its loveliness increases; it will never pass into nothingness.” John Keats 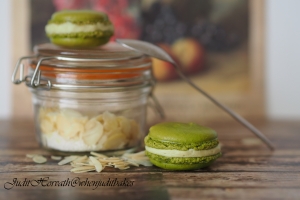 Many, indeed many, people have some kind of a relationship with macarons. Some love to eat them, some love to make them, some have to see them, some can’t stop buying them, some swears never to make them…and so on. The sophisticated, enthusiastic baker belongs to all the groups (Welcome to my world!!!). 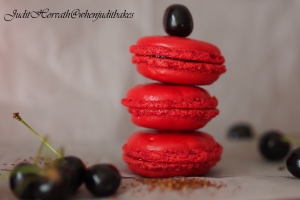 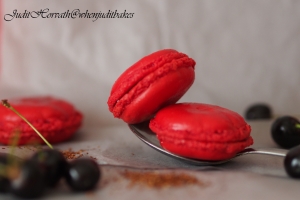 The Macaron cookie was born in Italy, introduced by the chef of Catherine de Medicis in 1533 at the time of her marriage to the Duc d’Orleans who became king of France in 1547 as Henry II. The term “macaron” has the same origin as that the word “macaroni” — both mean “fine dough”. The first Macarons were simple cookies, made of almond powder, sugar and egg whites. 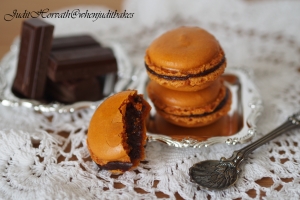 Many towns throughout France have their own prized tale surrounding this delicacy. In Nancy, the granddaughter of Catherine de Medici was supposedly saved from starvation by eating Macarons. In Saint-Jean-de-Luz, the macaron of Chef Adam regaled Louis XIV and Marie-Therese at their wedding celebration in 1660. Only at the beginning of the 20th century did the Macaron become a “double-affair”. Pierre Desfontaines, the grandson of Louis Ernest Laduree (Laduree pastry and salon de the, rue Royale in Paris) had the idea to fill them with a “chocolate panache” and to stick them together. Since then, French Macaron cookies have been nationally acclaimed in France and remain the best-selling cookie in pastry retail stores. 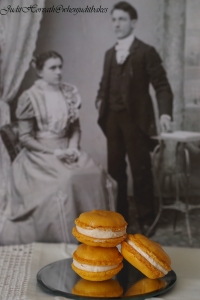 Preheat the oven to 150 degrees C. Place egg whites and caster sugar in a bowl and mix with electric mixer until stiff enough to turn the bowl upside down without it falling out, continue to whip for 1-2 more minutes.   Add gel or powdered food colouring and continue to mix for a further 20 seconds (no more). Sift the almond meal and icing sugar and salt twice, discarding any almond lumps that are too big to pass through the sieve. Beat into 1/3 of the egg white mixture. It should take roughly 30-50 folds using a rubber spatula.  Then add the second third of the mixture, finally fold in the remaining egg white mixture. The final mixture should be smooth and a very viscous, not runny (over-mixed macarons will be flat and have no foot, under mix and they will not be smooth on top). Pipe onto trays lined with baking paper, rap trays on the bench firmly (this prevents cracking) and then bake in the oven for about 20 minutes. Check if one comes off the tray fairly cleanly and does not wiggle when slightly moved on the top. If  so, bake for a little longer (make sure non-stick baking paper is used). When completely cooled, fill with preserve, creme patisserie or flavoured butter cream.
“The best and most beautiful things in the world cannot be seen or even touched – they must be felt with the heart. ” Helen Keller

3 thoughts on “A Truly Sweet French Kiss in the Hope of an Autumn Romance: Macarons”